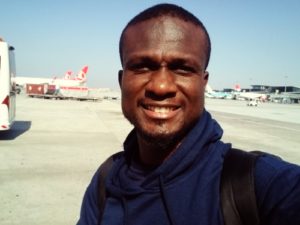 And so I arrived Istanbul for the 7-hour layover. What was I going to be doing for 7 hours?!
One way to avoid boredom is to do the obvious: get on the Internet. But that’s too easy, especially not when one is in Istanbul. Anyways, that wasn’t to be an easy option as the airport didn’t have free WiFi!

So, there was this Nigerian couple who were on their way to Nigeria. Once I got on board the plane, I observed them speaking their local language – and greeted them, owning up that I was Nigerian as well. We exchanged the necessary pleasantries aboard the Turkish Airlines plane and settled in for the 11-hour flight. Interestingly, I thought it was a 5-hour flight!

Later I finally got to know the usefulness of saying hello to them. After settling in, I decided to watch a movie. Funny enough, I only watch movies when I’m on board planes. Not that I fly a lot anyways. So midway the Captain America movie, I sleep off, exactly when they decide to serve dinner. The Nigerian man, observing that I was asleep, did everything possible to wake me, and beckoned on me to tell the hostess to provide me my own portion. You know the way we do it in Nigeria, getting what is due us, whether or not we need it. I cleared my eyes and lazily tried to get the attention of the hostess, as if it wasn’t a big deal. The man kept watch to ensure I was served my due. I was happy that I had someone watching my back. That hello must have been something – a brother was on board and must be treated right, he must have said.
Naturally, the kindred spirit permeated our veins and we both decided we needed to make it – together. So on checking their ticket and seeing that they were only to fly out the next day, I told them Turkish Airlines must have a hotel reservation for them – for free! That sounded exciting and we went in search of their hotel desk. We went round and round trying to find the hotel desk, and kept missing our way. Finally, after about two hours, we made headway. 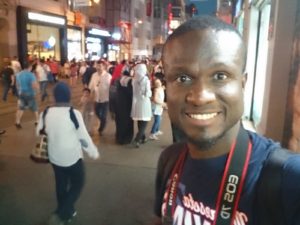 The thing with Turkish Airlines’ hotel desk is that they provide you with hotel accommodation all right, but you have to first go through Passport Control on your own in order to get to the hotel desk. That means you need an E-visa, unless of course you convince the young immigration officers to let you pass without one. I am not sure of that happening though. The other thing is that they have E-visa kiosks available, thus making it easier for those who needed visas to get them with ease. For Nigeria, the visa fee is but $40. A Nigerian I met and assisted with my credit card, did say, however, that the visa fee would be returned by the airliner. At least the customer rep assured her thus.
And so upon hearing the news of needing a visa, my friends decided to stay put in the airport. For me, however, it was an opportunity to see Istanbul. But two hours was already gone. I still hadn’t decided to go or not to go. My flight was for midnight and it was already getting to 7pm. 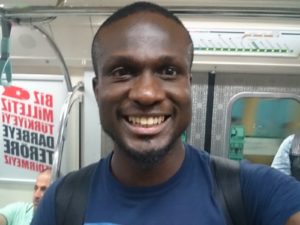 Finally I made up my mind. I decided that it was good experience anyways, at least I’d know how the system worked around there. And so the next question was, How do I get into the city?  What’s the most efficient way of doing so? 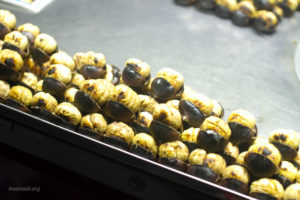 I got suggestions and I was told Taksim Square was a good place to start. And truly it was. In no more than 45 minutes we were on Taksim square. It was already dark, but was still beautiful to be on. I found some man selling some kind of roasted local snacks. I forget what the snack is called. I finally bought some and did it taste really good! 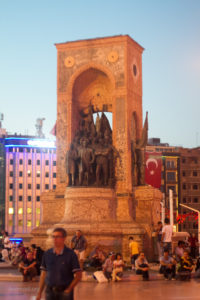 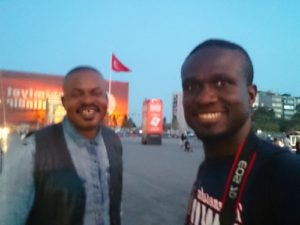 Barry and I on Taksim square

We walked down the street, and my belly reminded me that it was hungry and I decided to try some Turkish delight. It was good food. I enjoyed having basic rice and chicken, the Turkish way. How they transform their white rice to taste so good and still look white is a miracle. I remember the young boy at the cashier post wanting me to take a picture of him. I did, gladly. 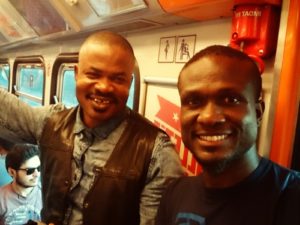 I forget to say. I had a Nigerian man as fellow traveler on this journey to the heart of Istanbul. He was very kind to help out with my back pack which was weighing me down. He was from the western side of Nigeria, and had a very kind heart. Barry he said his name was. He didn’t come directly from Nigeria. He lived in South Africa and came on a 3-day tourist visit to Istanbul.
Together we went to Taksim square and when it was 9:15PM, I decided it was time to start heading back to the airport. The metro ride was swift and sure, and within 1 hour I was back at the airport to commence the screening. 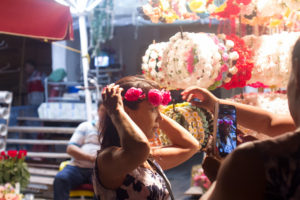 I was happy, but would have been happier if I had made up my mind earlier!

Oftentimes life presents us with many opportunities. But trying to make the choice of which way to go usually slows us down.
My pastor friend suggests that you pray to God, presenting all the options at his feet; next you cast your bread upon the waters, pick a door and move, and if God closes that door, you change to another one. He said this regarding choosing a wife though. 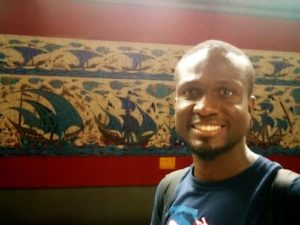 But I have found 3 P’s for making life decisions, especially when there are so many options:

1. PRAY about it. Like really pray and listen to what God speaks to your spirit. The still small voice will speak. God still speaks to His children.

2. PICK a direction. Well, you can’t wait forever on the sidelines; life will pass you by. Indecision is the sure way to stagnation. Having prayed, pick the direction most linked to your purpose, vision, and plan for life.

3. PURSUE. Having picked a direction, pursue with all your might. Invest your whole life into it. Invest as if that’s the one way you’ve got. And see it succeed.

Peradventure it doesn’t, and you reach a cul de sac, then it’s time to pray, pick another plan and pursue it with all your might.

I believe in you.
You’ll succeed!

My #LA187 Family And Our Different Voices.

WHAT IS FAMILY? Two or more people who share goals and values, have long-term commitments…

​Do Something Significant: Confront Your Fears

Never turn your back to the enemy. Confront those fears until you win. You will win in Jesus name.

Well, I had the opportunity of meeting my brother Michael in church today, and later…