Deprecated: Unparenthesized `a ? b : c ? d : e` is deprecated. Use either `(a ? b : c) ? d : e` or `a ? b : (c ? d : e)` in /home/ikeamadi/public_html/wp-content/plugins/js_composer/include/classes/editors/class-vc-frontend-editor.php on line 646
 #MarryHer: How to Make International Relationships Work by Engr. Manyo Ndoma. – Do Something! skip to Main Content 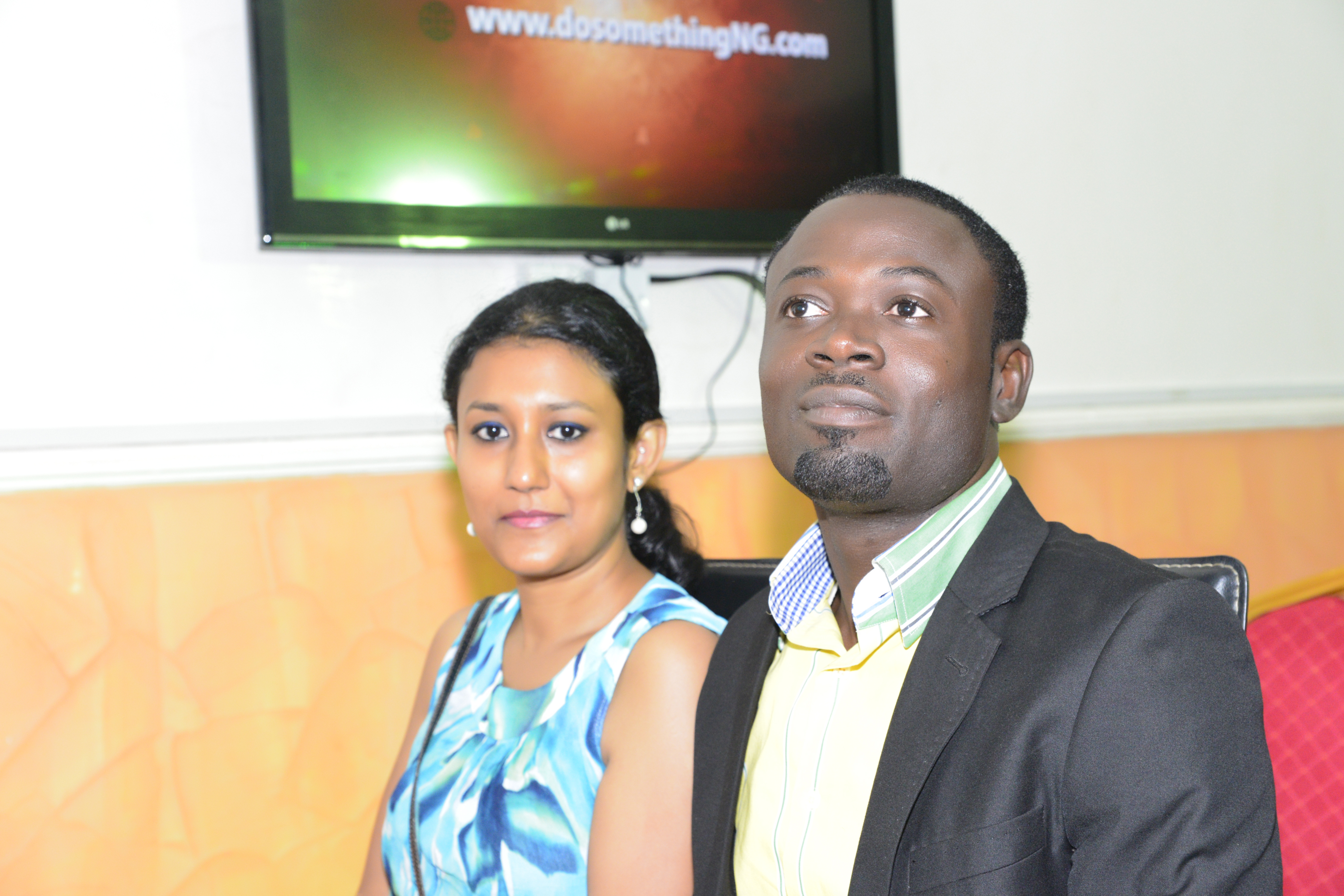 Ike Amadi Show had the opportunity of interviewing Engr. Manyo, who successfully married the wife of his dreams, notwithstanding the various hurdles along the way. We were interested in finding encouragement and lessons from his story. Thankfully, he granted us an interview. We hope this encourages someone who is planning on getting involved in an inter-racial relationship.

Ike Amadi Show: When did you meet your wife, Deepthi, and why did you decide you’d spend the rest of your life with her? What encouraged you? 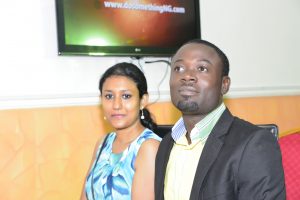 I met my wife, Deepthi, sometime in 2006 in the church where we both worshiped. I remember at the time she was part of the ushering group and seemed a very serious-minded person. Deepthi was a great lady that exhibited a virtuous character that got me initially sort of intimidated. We became friends much later and then in 2007 we were sure God spoke and led us to a relationship with each other. Our whole relationship hung on this fact, and despite the gruesome challenges we saw ahead, it was exciting then to see how God was going to make it happen. We were deeply encouraged by the Holy Spirit and through our leaders, friends and some family members.

Ike Amadi Show: Did you count the cost before making that decision? Do you think many fail because they did not really count the cost?

Hmm, did I count the cost? Well I sort of did. And really it was overwhelming. The value of the prize however, far outweighed the cost. Moreover, it was a journey I knew I wasn’t taking alone. Since Heaven had our backing, there was full insurance!

Many fail, maybe because they never really made up their mind, as many relationships are all about trials. And since they walk in this mentality, they easily back out if anything goes wrong or [becomes] uncomfortable. Deepthi had a shockingly different mindset. It was this or nothing, she either got married to me or no one at all. Before now in my life I was in a position where I felt relationships were too valuable and costly to just walk in and out. I made up my mind that I wasn’t going to commit to anyone without being fully persuaded I was in God’s will. So for us a lot of things were involved, our emotions, wills, spiritual ties, etc.

Ike Amadi Show: Was there resistance from your family or her family? How did you overcome this resistance?

There was resistance. Coming from cultures that are so dynamically different, one couldn’t expect less. We initially had resistance from many family members and even close friends. When they saw the resolve and commitment, however, most let down their guards and accepted us. It was part of the considered cost and nothing that surprised us. That helped us handle things quite maturely and patiently. The encouragement however from those on the other side of the fence proved really valuable in dealing with the resistance. Staying true to our commitments and holding on to the Word we received helped us through it.

Ike Amadi Show: I know you were separated by distance for a while. Did it discourage you? Was there a time you contemplated throwing in the towel?

We had a fairly good understanding of times and seasons in our lives. It was kind of unavoidable for us to stay apart most of the times we were in a relationship, and we focused on the reasons that kept us apart. We focused on doing what we had at hand as it was part of the plan to come together at a point. I wouldn’t say the distance was discouraging neither do I remember any point when I wanted to give up. The frustrations came once in a while, the many unanswered questions and uncertainly were always lurking around. But somehow we kept faith and took it a day at a time. If you can avoid the distance, please do avoid it. But whether thousands or few miles apart, keeping communication lines open is quite crucial. Stay in each other’s face. Keep focus on the plan to come together finally.

Ike Amadi Show: How did you react to friends who encouraged you to forget the idea and settle down with a Nigerian woman?

Was there encouragement from any quarters?

Some friends did raise some of such suggestions. I feel they probably did it to test my resolve. Once they saw true commitment, it never was an issue anymore. Instead they began encouraging and even adding pressure of a reunion. So my reaction was to show that I loved Deepthi and was very happy with her. True friends who are after your happiness will come around once they see and not just hear about the love you share in your relationship.

Ike Amadi Show: I would like to think that your professional competence played a very great role in guaranteeing your resoluteness; is it so? Would you say that the fact that you could take care of yourself helped you remain steadfast in the storm?

That’s quite difficult to answer as I’m trying to draw out the correlation. I don’t think my being resolute had anything to do with my professional competence. I loved Deepthi and felt she was well capable of taking care of me and our family. To a part of your question though, having skills that one can trade for liquidity is quite crucial in boosting one’s maturity as marriage is a lot about maturity and mindset. My professional competence and the fact that I had a decent job helped convince our families that I could afford the cost of managing a foreigner as wife in Nigeria when the time came to come together.

Ike Amadi Show: How about the woman. Do you think she plays any role in the success of an international relationship?

She certainly does. You need two hands to clap. Just like the guy, she must be totally in and committed to the idea of the relationship. At my lowest points, considering Deepthi’s love and commitment to our relationship made a lot of difference. She faced a lot more challenges than I did and the way she handled it served as a testimony of her love and commitment to me. This was one of the greatest sources of encouragement.

Ike Amadi Show: What advice do you have for a young man who wants to marry a foreign national? Would you encourage it?  Are there any tips to making foreign relationships work?

I think I’ve left off a lot of tips in my earlier responses about building relationships. We must realize that humans, irrespective of nationalities or backgrounds, are more similar than different. Relationships, whether interracial or not are very similar and as such, tips for building successful, regular relationships do apply to interracial relationships as well. One of the big differences though is the cultural differences that exist between both parties. I feel this is where the adventure really is. If one is curious and fascinated by the culture of the other, and is mature enough to appreciate and respect the differences, then that’s most of what it takes.

Ike Amadi Show: Thank you for this enriching session, our Dsmentor Engr. Manyo Ndoma. We hope to have you on the show one more time to tell us how you are doing in the marriage and share more tips on how to enjoy the marriage proper with an international wife.

How To Choose A Life Partner.

Marriage is a life decision. One of those decisions that will either give you eternal…

If he has a plan for his life, … #MarryHim

You really don't have to struggle to find a good wife. Just plan your life well and other things will be added unto you, including a good wife. Read to find out more on how ladies think about a man who has his life planned out.

How Do You Know God’s Will for your Marriage? via @cherryblanche

The concept of God's will is an endearing one. People say: "I want God's will…